Chicago O’Hare International Airport (IATA: ORD, ICAO: KORD, FAA LID: ORD), also known as O’Hare Airport, Chicago O’Hare, or simply O’Hare (/oʊˈhɛər/), is an international airport located on the Far Northwest Side of Chicago, Illinois, 17 miles (27 km) northwest of the Loop. It is the primary airport serving the Chicago metropolitan area, with Midway International Airport, which is about 10 miles (16 km) closer to the Loop and serves as a secondary airport. It is operated by the City of Chicago Department of Aviation.[9]

O’Hare was the busiest airport in the world by the number of takeoffs and landings in 2014, ahead of Hartsfield–Jackson Atlanta International Airport, which held the title from 2005 to 2013; however, it lost that title back to Atlanta a year later. Until 1998, O’Hare was also the world’s busiest airport by the number of passengers; it was surpassed mainly due to limits the federal government imposed on the airport to reduce flight delays.[10] As of 2016, O’Hare is the sixth-busiest airport in the world by passenger traffic, the third-busiest in the United States, and the busiest in the Midwest. O’Hare also has eight runways,[11] more than any other major international airport.[12] ORD covers 7,627 acres (3,087 ha) of land.

As of January 2017, O’Hare has direct service to 208 destinations, including 153 domestic destinations in the United States and 55 international ones in North America, South America, Asia, and Europe, making it an international gateway to much of the American midwest.[13] It is among a select group of airports worldwide with the distinction of serving more than 200 destinations, along with Heathrow, Frankfurt, Atatürk, Amsterdam, Charles de Gaulle, Atlanta, Dallas/Fort Worth, Munich, and Dubai.[citation needed]

O’Hare serves a major hub for United Airlines and American Airlines, as well as a hub for regional carrier Air Choice One, and a focus city for Frontier Airlines[2] and Spirit Airlines.[3] It is United Airlines’ largest hub in both passengers carried annually (16.6 million in 2016) and daily flights (585 on average).[14] It is also American’s third-largest hub, behind Dallas/Fort Worth International Airport and Charlotte Douglas International Airport, and third-largest by number of daily flights, operating 527 daily flights to 120 destinations, including 201 mainline flights daily.[15][16]

O’Hare was voted as the “Best Airport in North America” for 10 years by two separate sources: Readers of the U.S. Edition of Business Traveler Magazine (1998–2003) and Global Traveler Magazine (2004–2007).[17][18] In contrast, Travel and Leisure magazine’s list of “America’s Favorite Cities” (2009) ranked Chicago’s Airport System (O’Hare and Midway) the second-worst for delays, behind the New York City airport system (JFK, Newark Liberty, and LaGuardia).[19] O’Hare accounts for nearly 20% of the nation’s flight cancellations and delays.[20]

Most of O’Hare Airport is in Cook County, but a section of the southwest part is in DuPage County. The airport is within a section of the City of Chicago contiguously connected to the rest of the city by a narrow strip of land about 200 ft (61 m) wide, running along Foster Avenue, from the Des Plaines River to the airport.[59][60] This land was annexed into the city limits in the 1950s to assure the massive tax revenues associated with the airport would go to the city.[citation needed] The strip is bounded on the north by Rosemont and the south by Schiller Park.

A terminal map of O’Hare Airport 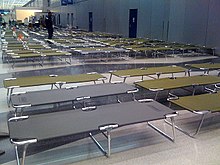 O’Hare has four numbered passenger terminals with nine lettered concourses and a total of 182 gates. Two or more additional terminal buildings are envisioned; there is the possibility of a large terminal complex for the west side of the field, with access from I-90 and/or the Elgin-O’Hare Expressway, if the runway reconfiguration is completed and passenger numbers require additional terminals.

With the exception of flights from destinations with U.S. Customs and Border Protection preclearance, all inbound international flights arrive at Terminal 5, as the other terminals do not have screening facilities. Several carriers, such as American, Iberia, Lufthansa and United, with outbound international flights depart from Terminals 1 and 3. This arrangement requires that passengers disembark at Terminal 5 and then, crews tow the empty plane to another terminal for boarding. This is done, in part to make connections for passengers transferring from domestic flights to international flights easier, since while Terminals 1, 2, and 3 allow airside connections, Terminal 5 is separated from the other terminals by a set of taxiways that cross over the airport’s access road, requiring passengers to exit security, ride the Airport Transit System, then reclear security in either direction. 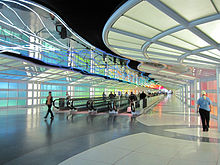 An underground pedestrian walkway connects Concourse B to Concourse C, illuminated by a neon light show

Terminal 1 is used for United Airlines flights, including all mainline flights and some United Express operations, as well as flights for Star Alliance partners Lufthansa and All Nippon Airways. Terminal 1 has 50 gates on two concourses:

Concourses B and C are linear concourses located in separate buildings parallel to each other. Concourse B is adjacent to the airport roadway and houses passenger Check-ins, baggage claims, and security screenings on its landside and aircraft gates on its airside. Concourse C is a satellite terminal with gates on all sides, in the middle of the ramp, and is connected to Concourse B via an underground pedestrian tunnel under the ramp. The tunnel originates between gates B8 and B9 in Concourse B, and ends on Concourse C between gates C17 and C19. The tunnel is illuminated with a neon installation titled Sky’s the Limit (1987) by Canadian artist Michael Hayden, which plays an airy and very slow-tempo version of “Rhapsody in Blue“.

Concourse B features an extension at its northern end (gates B18-B22) commonly called the “banana gates” due to the extension’s narrow curved shape. The final gate, B22, branches off into three separate jetways for three regional jet parking positions.

There is a United Club in Concourse F near gate F8, and a Delta Sky Club in Concourse E near gate E6. United Continental Holdings, United’s parent company, is currently upgrading its facilities at Terminal 2, including constructing 10 new jet bridges for the regional flights, reconfiguring the holding rooms, and constructing a United Club to replace the current lounge.[81] US Airways operated out of Terminal 2 until it moved operations to Terminal 3 in July 2014, to be co-located with its merger partner American Airlines. Check-in for US Airways remained at Terminal 2 until September 16, 2014, when ticket counters relocated to Terminal 3.[82] 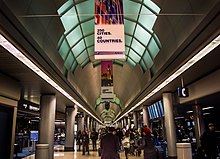 Terminal 3 houses all American Airlines flights, as well as departures for select Oneworld carriers including Iberia and Japan Airlines, plus unaffiliated low-cost carriers. Terminal 3 has 75 gates (5 to be added) on four concourses:

Concourses G and L house most American Eagle operations, while Concourses H and K house American’s mainline operations. American’s Oneworld partners Japan Airlines, and Iberia depart from K19 and non-affiliated Alaska Airlinesoperates from H4. Concourse L is used also for flights operated by Frontier Airlines, Spirit Airlines, JetBlue, Virgin America, and Air Choice One. The City of Chicago and American Airlines have agreed to an extension of the L Concourse to add five new gates. The gates are expected to be used primarily for American Eagle’s Embraer E-175 fleet. American has agreed to pay roughly $55 to $75 million and the gates are expected to be completed by 2018.[84] The airline operates three Admirals Clubs in Terminal 3: one located in the crosswalk area between gates H6 and K6, one after security before Gate L1, and one in Concourse G across from gate G8. American also has a Flagship Lounge (currently branded as International First Class Lounge) located near gate K19.[85] The Flagship Lounge is scheduled to move underdeath the Admirals Club located in the crosswalk area between gates H6 and K6 in late 2017.

Terminal 5, with flags of countries around the world

Aircraft lined up at Terminal 5

Terminal 5 houses all of O’Hare’s international arrivals (excluding flights from American Airlines and United Airlines from destinations with U.S. border preclearance.) Other destinations with U.S. border preclearance, including flights operated by Aer Lingus and Etihad Airways, arrive at Terminal 5, but are treated as domestic arrivals. With the exception of select Star Alliance and Oneworld carriers that board from Terminal 1 or Terminal 3 respectively, all non-U.S. carriers except Air Canada depart from Terminal 5. Terminal 5 has 21 gates (9 to be added) on one concourse:

Terminal 5 underwent a $26 million renovation designed by A. Epstein and Sons International, Inc., which began in July 2012, which involved adding dining and retail post-security, including many Chicago-based restaurants and brands, updated design, and a re-engineered layout. The project was completed on April 4, 2014. Terminal 5 is run by Westfield Management.[86]

O’Hare recently developed a gate capable of accommodating the world’s largest passenger aircraft, the Airbus A380. On February 10, 2016, the Chicago Department of Aviation approved the construction to build out a gate that could handle the Airbus aircraft.[87] The new gate, M11a is the only gate capable of handling the Airbus A380 and, like other gates in Terminal 5, is designated as “common use,” meaning no specific airline has exclusive control over it. Emirates and British Airwaysexpressed interest in using their A380s on routes involving O’Hare. The gate became operational on July 19, 2016, with Emirates being the first airline to use it.[88] British Airways announced on August 8, 2017 that the A380 would fly to O’Hare on one of its two daily flights starting May 8, 2018

Reported Lost has been Reuniting Travelers with their
Lost Property Worldwide